The UK government has announced a review of the British university system, admitting the current system hasn't worked as they had hoped. In particular they are concerned about the high costs, limited course options, and a fall in part-time students.

In 2012, the maximum tuition fee universities in the UK could charge British students per year was raised from £3,000 (130,000THB) to £9,000 (400,000THB), and it is now at £9,250 (410,000THB). This was done so the government could reduce the subsidies it gave to universities to try to reduce the amount the government is borrowing. This didn't change anything directly for non-EEA students, as there was never any cap or subsidy for them, so they were always charged the full costs of the course anyway. 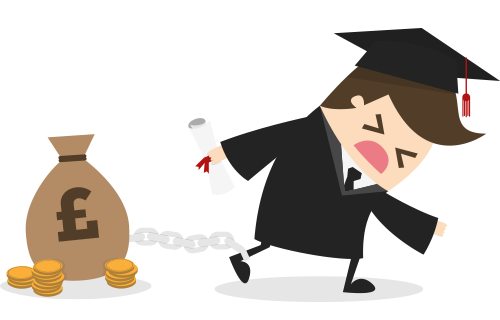 In order to help students pay for university there is a student loan system. British students can loan the full amount of their tuition costs, and they only have to pay off 9% of what they earn over £25,000. However, many people do not fully understand this system, especially mature part-time students who may not have it explained to them. The average UK student now leaves university with a debt of £50,800 (2.2M THB), and they feel this is a huge burden, even if they don't believe they will ever repay it.

In addition to reducing government costs, the UK government also hoped this new system would create a more diverse market with more universities charging different fees, and that more UK students would choose to study abroad.

However, nearly all universities now charge UK students the maximum fee, or close to it; only 1.6% of UK students choose to study abroad; and reductions in productivity growth estimations mean that 83% of UK students will never pay off their student debt, so the government will not save as much money as expected. The number of part-time students has also fallen dramatically.

So what does the government want to change?

Although the government has a number of ideas, the final recommendations will be made by an independent review panel. 🙂